The next day, I woke up equally early, but this time more on purpose. HiDeathinition would be my ride these two days, and we had agreed that I’d be ready at 8am so we’d be there nice and early. So when he texted me at 7.30am that he was there already, like any good woman, I was far from ready. So I rushed, got ready quickly, and met him outside. Like with Sk8, HiDeath is just exactly how he is online, and that meant that before long, we were chattering and making jokes exactly like we would on teamspeak.

The drive to the event went by very quickly, and as always when traveling, I enjoyed the scenery a lot. I’m always in awe of the gorgeous countryside Britain has, along with all the nice old buildings, the little walls everywhere instead of fences. Absolutely love it. When we got closer to it, we started seeing more people going in the same direction (pointed out Monkeyworld). We parked, then crossed the field to the entrance and queued up. My VIP bracelet would have let me enter straight away, but that wouldn’t have been fun for HD and really, it’s part of the whole experience. It was in that queue that we were sold a program and a little bag, and found out that I was actually mentioned in the program, together with Sk8. That was pretty cool.

Now, as the program shows, we could meet and greet our fans in Wargaming’s tent. Both our channels aren’t that big yet, when you compare them to Jingles or Quickybaby, but for us, it was the perfect opportunity to meet the Blitzers we knew would be attending Tankfest. The only downside was that our slot coincided with the opening speech of the director of the museum, and the first show (which features three tanks racing around the field, including a Leo that was imported for the event from the Netherlands). From the tent, we saw glimpses of it, and heard the roar, but it was quite clear that I really had to be at the press area for this the next day, to fully experience that. 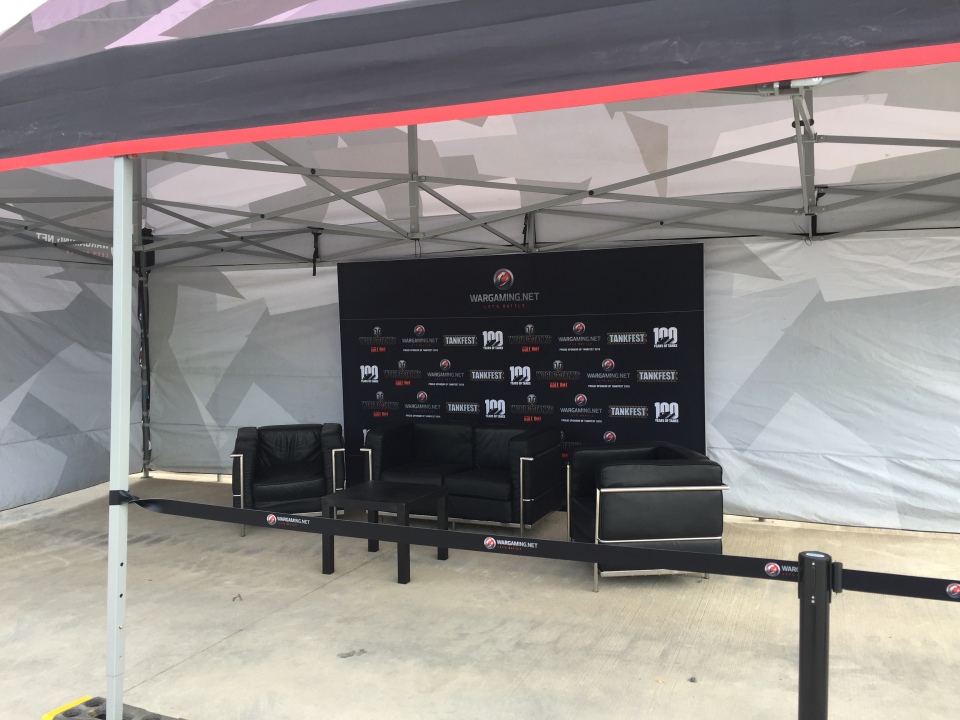 The tent itself, was perfect. It allowed a welcome space not filled with people (I’ve never been comfortable with large crowds), so it was lovely to just get used to the amount of people around. We were visited on Saturday by Zach, MeetThyDoom, Radinko and Rossolancer. It was lovely to meet them, seeing the faces of the people I’ve been chatting with and all and getting to know them a little. After our meet & greet hour, HD and I went to the foodcourt for breakfast. This is worth nothing, because they had Jumbo Bacon Dogs. And they were to die for, with lots of Bacon. Yum HD took something else, but really regretted it when he saw what I had.

With new fuel inside, we headed to where the tanks would drive into the arena and took a selfie there, as we still hadn’t done that, and were photobombed by someone that did really not look happy to be there, or to see us. We think he might have belonged in Monkeyworld, but had somehow taken a wrong turn.

At that point, I saw a tank with a love camo net on it, and had to take a picture of that too. Half the clan calls me Camaunet, so I’ve dubbed this ‘my’ tank. HD explained to me that this wasn’t so much a normal camaunet, but more of a blanket for the tank, to hide the heat signature a little. Considering the weather we had that day, I think the people inside it will not have enjoyed that much.

After that, HD and I went to the museum and toured around there. I was surprised at how much I hadn’t yet seen, despite having crossed and walked through so much of the museum the day before. For starters, I found the Luchs, which is as adorable for real as it is in the game.

Then I took a selfie with the first tier IX tank I ever drove – the lovely Jagdtiger. Taking selfies with tanks was quite fun, to be honest, also because it gives a bit more perspective on how big they can be. 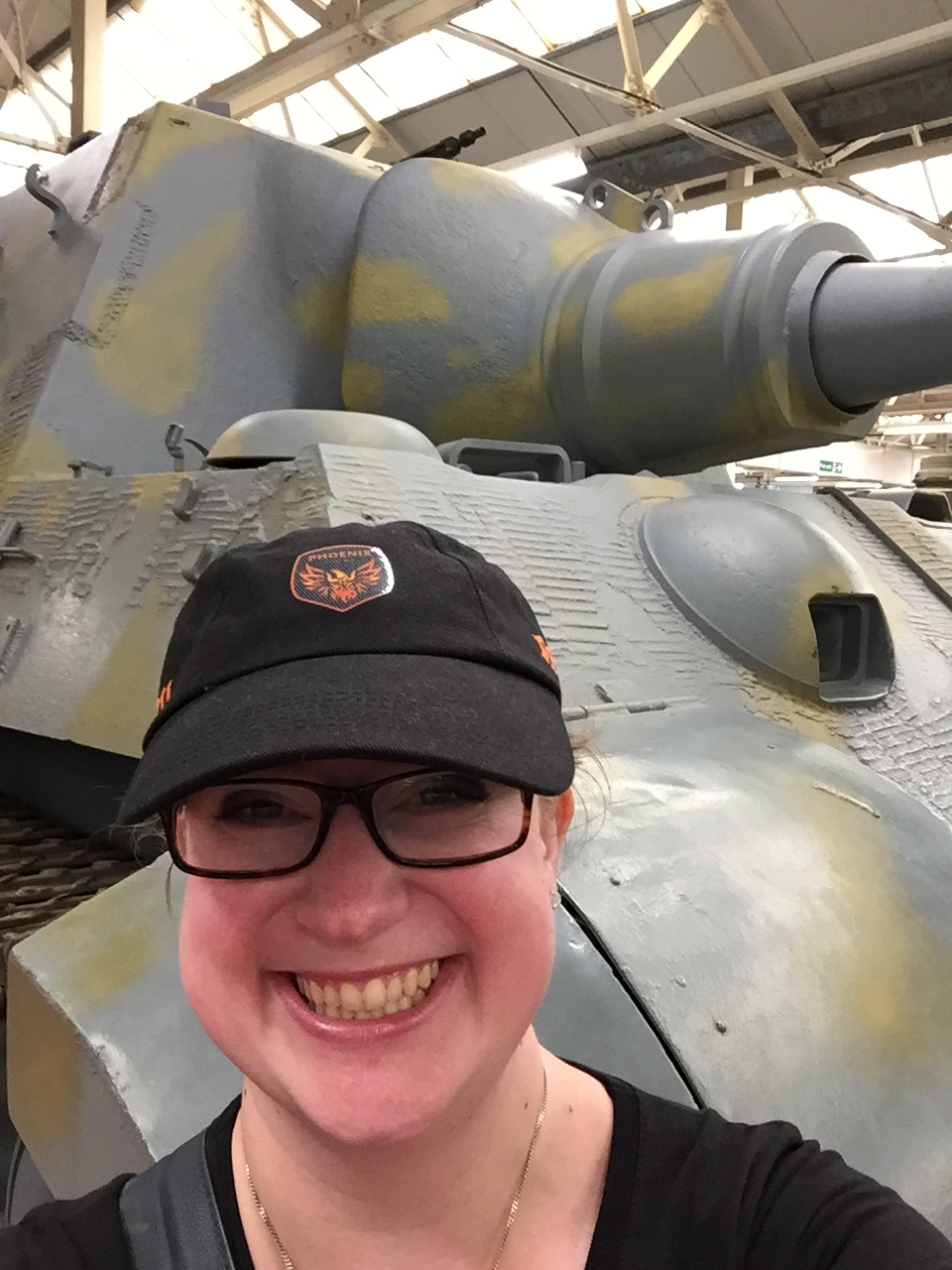 Like the Tog. It really is a landship, and all the memes I’ve seen of it, the nicknames, they all fit, they’re all true. Tog is basically an ark and can save us all come the Apocalypse (I may be exaggerating a little there. A little…), which gives a whole new meaning to the motto “Tog is love, Tog is life”. 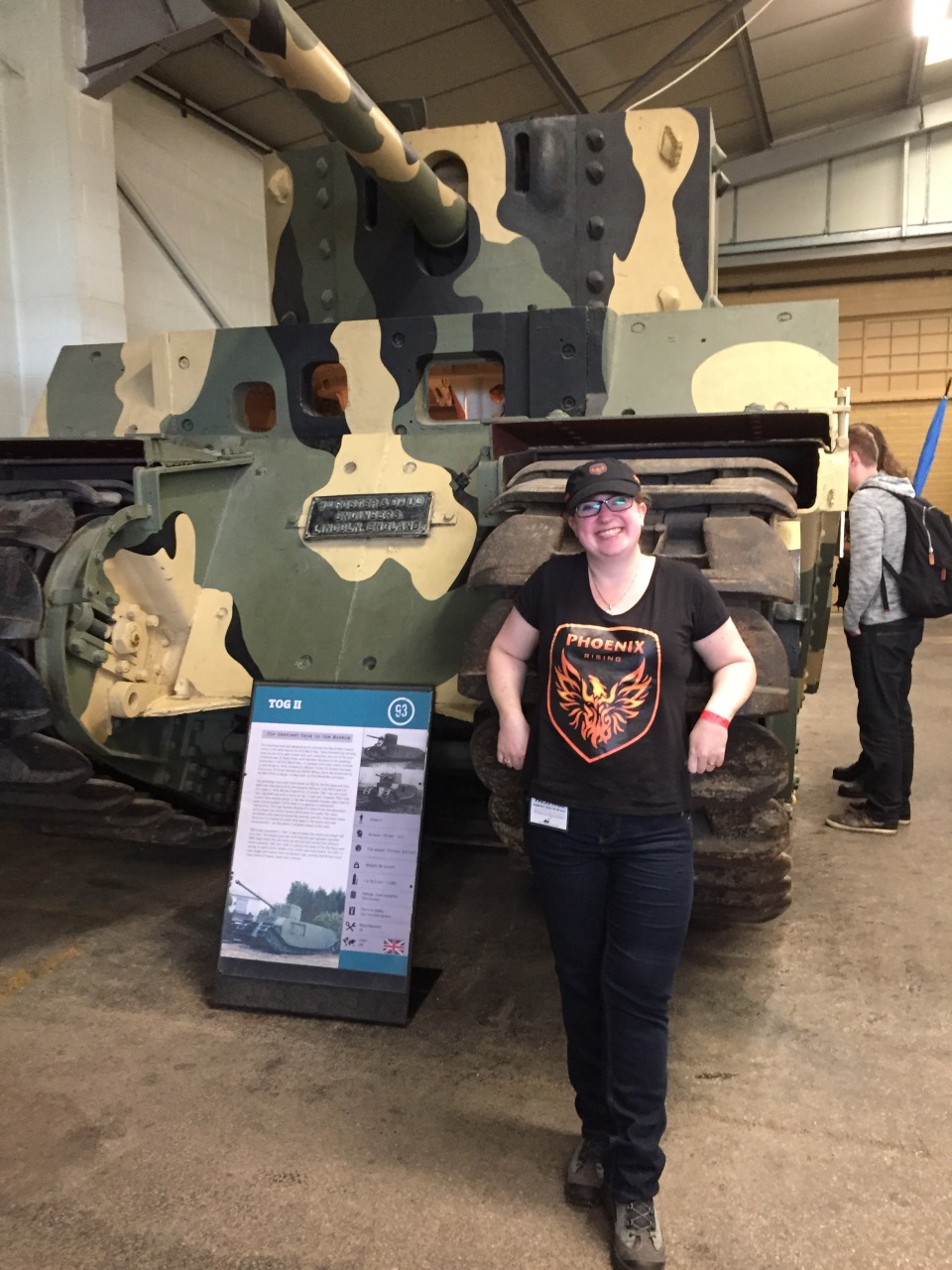 I saw every inch of the museum again that day, and I know for a fact that I still wasn’t able to see all – mostly the history part of it has been neglected, on account of me not wanting to take the time to read it all and give it the attention it deserves. With all that was going on outside in the arena, I knew that whatever we did inside, we’d miss something. On the other hand, there was always Sunday to view all that. The museum is an absolute marvel. All the tanks, the details, the attention it’s all gotten, it’s wonderful. It’s the kind of museum where you can visit again and again, and discover something new each and everytime. What made it extra fun is that we kept running into Sk8 and his entourage too, and that was always a pleasure.

After we finished looking inside the museum, we went to the conservatory to play some Blitz and get HD a goodiebag (and see if I could get Dimi one, because he’s very kick happy, and it’s always good to have something to bribe him with so I can stay in Phoenix). The Tankfest accounts for Blitz turned out to have quite a few tanks we weren’t supposed to see or have yet. Like a Swedish med, tier VI, with an autogun, that I can’t wait to see in game, the T26E3 that we have gotten by now, and the Cromwell B, that we’re getting tomorrow. I mostly drove the T26E3 because I was highly curious about that, and hadn’t even heard of before then. I would have driven the little Swedish monster, but that was already removed by the time I got to play, alas.

We had excellent timing with queueing and sitting down to Blitz, because we got to see Quickybaby play a little too, which was quite fun, because then you get to see the entertainer-side of him. He played the crowd perfectly, and the game, while his significant other held the microphone for him so he could focus. That was really fun to witness.

Since we were only allowed to play two games in a row, it wasn’t too long before HD and I had to go again. New goodiebags in hand, we went back to the tent area, where, due to the rain, the tankmodels you could drive around had been taken away, but the tent remained, creating a perfect little shelter. Before us was the queue to meet Jingles, and in there, we met MeetThyDoom & his family again, so we talked a little as they waited. And he turned out to be just about the luckiest person, because he and his family were the last ones in the queue that got to say hy and get an autograph and picture with Jingles.

But as Jingles started to make an exit, hands full with stuff he’d gotten from his fans, this little boy walked up to him with a marker and a t-shirt. Since Jingles is genuinely a really nice guy, he stopped to give the kid one, but other fans saw this as an opportunity to butt in too, left the queue and Jingles was more or less swamped. That really wasn’t fun to witness, it looked frightening and suffocating. For some reason, people who are famous, whether it’s from movies, singing or youtubing games, aren’t often seen as people anymore. Or rather, they’re not treated as such. Personal space? Privacy? Apparently you’re not entitled to that when you’re well known.

And it was at that moment that I realised I was so glad that Blitz is still small, and that I’m not that well known – and I really have no desire to ever become that known. Ph3lan rescued Jingles, and he got away from it all – with all the gifts from his fans. I realise that being that famous isn’t all bad, the gifts for one are completely sweet and wonderful, but I think it can be really stressful and unpleasant when you get situations like that, and I wonder if people realise what that kind of thing can do to the person you’re supposedly admiring or are a fan of in any case.

HD and I watched the famous Tiger battle near the end of the day, before the first day of Tankfest as officially concluded. We headed back to the car to return to Bournemouth. I realised that the next day, I would be spending quite some time in the press area behind the arena, for pictures and videos. Sk8 had said he’d be doing the same, and I was glad of that, because despite meeting him multiple times in the museum, I felt like we really hadn’t been spending much time together that day at all, and I regretted that.

Now, the day wasn’t over yet for us – we still had to meet up with Tom7577 and his family for dinner. We found a TGIF near Bournemouth, so that would be the perfect place. The Netherlands doesn’t have TGIF, but I know it, and omg I love American food-style restaurants. They always have spareribs. We met up there at 8, which I thought was quite late for Tom’s kids. But they behaved absolutely impeccably. I was seriously impressed. Utter sweethearts, completely well-behaved. Great sense of humour too. Tom got a giant burger, that he had to squeeze hard before he could get it into his mouth at all, but he did manage it. 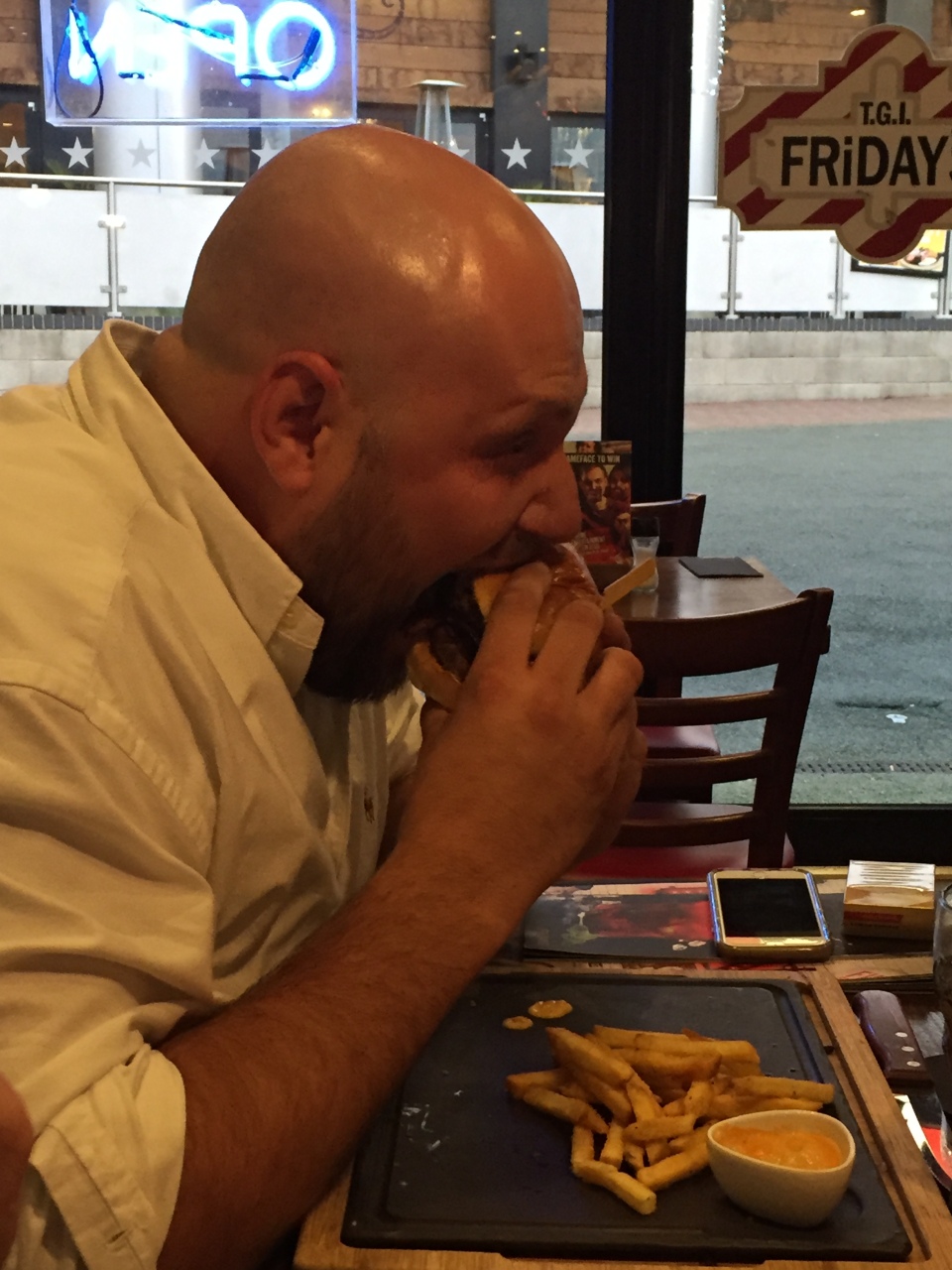 All in all, it was great fun, the food was delicious, and the people completely wonderful. We said good night at around 10, and HD and I went back to our respective hotels. It was there that I found out that Transformers 2: Revenge of the Fallen was on tv, so I knew I would have little sleep, despite HD telling me on discord to go to sleep. He doesn’t have the authority with that as José, so it didn’t work and I watched until the very end. But like the sky the day before, it was the perfect ending to such a wonderful day.