I’ve been wanting to write this ever since I got back from Tankfest, but because I was moving, I simply haven’t had the time (or internet ;_; ) to work on this properly.

My tankfest adventure started on Wednesday, June 22nd. That was my father’s 65th birthday, so we had a nice bbq in his backyard, before he drove me to the station with my suitcases. Now, despite it only being a long weekend, I did need a big suitcase to check in as well. Aside from toiletries, I was carrying 4.5kg worth of cookies (bribes). Aside from that, I’m a woman, and it’s a known fact that we always take way too much stuff/clothes with us. It’s just how we work. All that aside, my suitcases are a very bright (neon) green, so very recognizable. I got them because of that, and very often I see them enter and exit the plane, so will know my luggage is actually going with me.

Anyhow, I left Nijmegen at 21.32, had to transfer once, and arrived at Schiphol Airport at 22.58, only to find out that the hotel I had booked was actually -behind- security. Oh joy. Having no clue how to go about that, I went to the airport information desk and the very kind lady there explained exactly what I should do – she even took out a little map of the airport and drew out where I had to go. 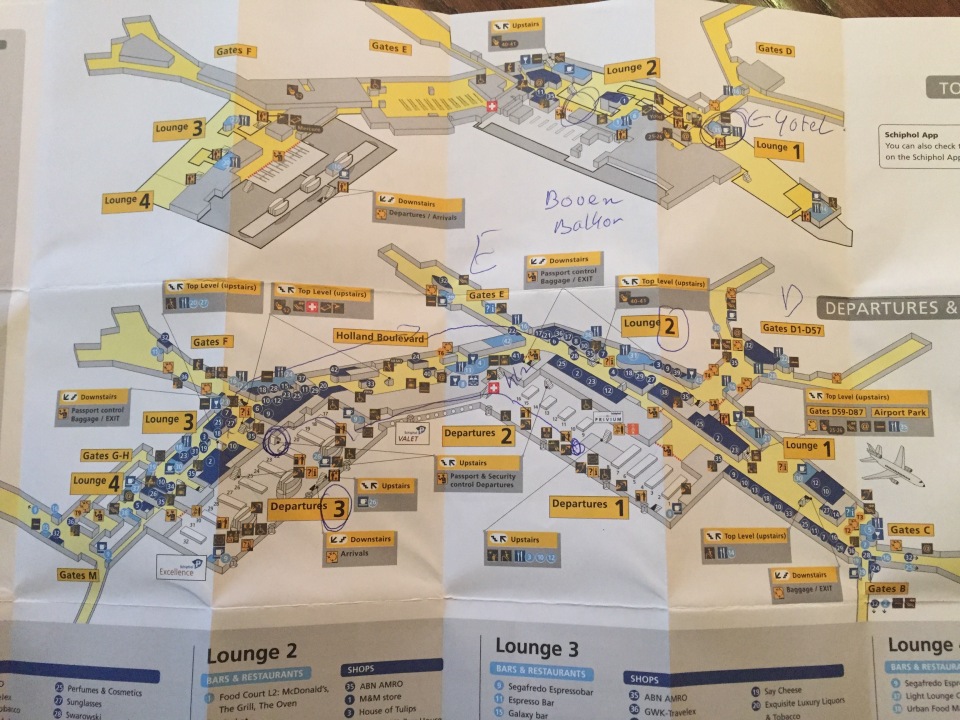 So, with the map in hand, I went to the luggage depot – as I couldn’t take my main suitcase with me, of course. As the lady told me to, I took my toiletries, pj’s and chargers out of my big suitcase and put them in my hand luggage-suitcase, and put the big one into storage for the night. This was at Arrivals 1. I then had to go up the stairs to Departures 1, and from there on, head all the way to Departures 3 (other side of the airport) because it was so late and the other parts weren’t open anymore.

There, I had to cross all the deserted baggage check-in points, to arrive at a security guard at the back. He checked my reservation for the hotel, asked me if I knew how to find it, was happy I had a map, and let me on through. So, I headed up the escalator, walked around the offices there to end up at another security.

There, I learned I shouldn’t have taken my toiletries with me (despite the lady telling me I had to take them with me), but I had a really nice security person there, that, after my hand luggage was scanned and the thing of course didn’t like it, he let me take all but my diet coke with me, he just took my suitcase off the belt and gave it back, with the promise that I’d put the stuff back in my main suitcase the following morning. He then asked me if I knew how to find the hotel, and let me go on.

After another bit of walking, I arrived at the third bit of security, where the guard checked to see if I matched my passport, checked my reservation, asked me if I knew how to find the hotel, and then send me on my way. I have to say, I was impressed at the fact that they all asked me if I knew how to find it, and were so very helpful. That made it into quite a positive adventure. By now, it was midnight, but I was finally behind security at Departures 3.

From there on out, I had to cross most of the airport again, with all the stores and everything closed, to get back to just behind Arrivals 1, where my hotel was. I don’t think I’ve ever seen as much of Schiphol as that night. The hotel itself turned out to be mostly hidden and unadvertised, so even with the map, it was hard to actually find it.

The guy behind the desk there was nice though, and explained that the later in the day, the more hiccups the system always had. So when he tried to activate a keycard for me to get to my room, it of course didn’t work. We tried ten cards before he gave up. In the meantime, another guest had arrived too, but the man insisted that the nice guy behind the desk would escort me to my room first and get me in with the master key (the only working card, apparently), so that was very sweet.

The room itself must have been around 3 or 4 square meters in total, bed and bathroom included. It was literally a tiny cubicle, with the bed so high that I had trouble getting on it, even with the step along the way. At around 1am, with José telling me on discord to go to bed already, I set my alarm for 4 and a half hours later, and went to sleep. So, the following morning, I checked out of the hotel, and went to the luggage hall, to go through security again and arrive on the other side again. I got my luggage, got that sorted, went back to Departures 1, checked in, then went through all of security again so that I could actually go to a gate and get a plane out of there.

All in all, it had been quite an adventure so far, so when we boarded the plane and the pilot warned us that we’d be meeting some thunderstorms and would probably get lots of turbulence, I was actually quite excited. It fit right in with the adventure so far, and I’ve never seen a thunderstorm from a plane before. Considering the fact that we only see 1% of all lightning from the ground, for a thunderstorm lover like me, that’s definitely a sight worth seeing. Because of the weather at Schiphol itself, we took off half an hour late. 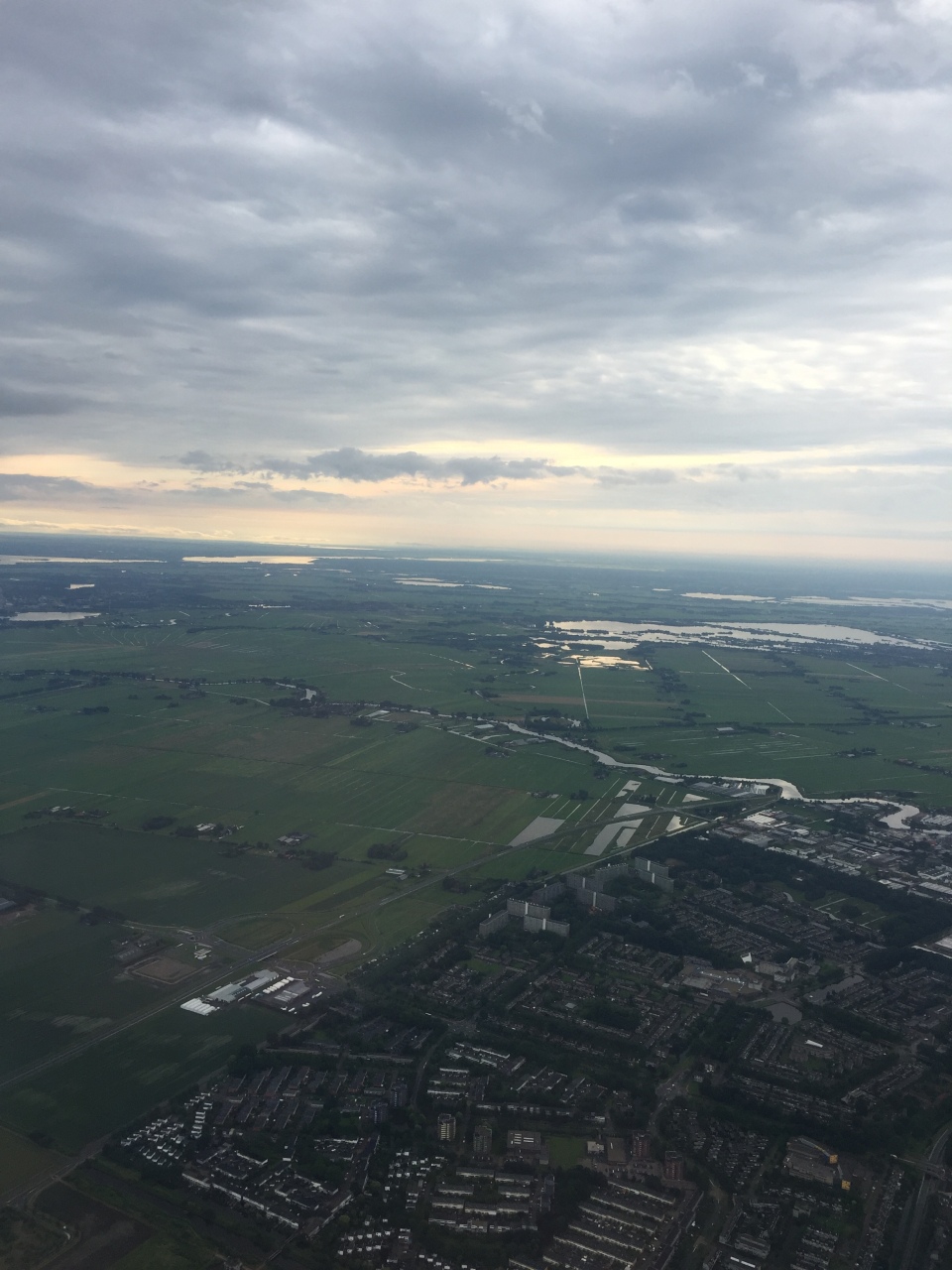 The flight…was absolutely boring. I get more turbulence from sitting in a rocking chair. No impressive cloud formations, no lightning, no nothing. That felt like such an anti-climax, I was thoroughly disappointed. Of course, it’s still lovely to look outside, see the sea, the country down below and all of that, but it wasn’t what I’d been promised. Once landed, I got my suitcase, and with my neon green monsters, headed to the station. There, I learned that the train I could take was 45 minutes late due to flooding – which meant that I only had to wait two minutes before it showed up.

Driving through the countryside was just lovely. I’ve always been a fan of the UK, and I really enjoy traveling in and through it. Especially when the train had to stop a moment for a sign and there was a peregrine falcon sitting right below my window, staring straight back at me. For the rest, the ride was uneventful, and once I’d gotten to Bournemouth, the hotel, which I had picked because it wasn’t far from the station, was easy to find. My hostess was really nice, and said that even though my room wasn’t ready (it was only 10.30am), I could just leave my luggage there. So I changed my heels for my walkers, and went off exploring (read: I went in search of the shortest route to the sea).

It had been ages since I last went to the sea, and I’ve missed it. The sounds, the smells, the sight…It was absolutely lovely just walking down from where I took that picture, towards the beach. Once there, I got myself a nice big icecream and just enjoyed it all for a while.

After that, it was time to explore Bournemouth properly. And that, for me, means shopping and finding a W.H. Smith to see if they have anything worth reading. So I got a little bit of shopping done, strolled around for hours, before finally finding my bookstore – only to buy no book at all (shocker, I know!). I eventually went back towards the hotel, but stopped at a supermarket for snacks and drinks. By the time I got back, my room was ready, and they had moved my suitcases into it.

I prepared my bribes for the people I’d meet the next day, and was so absolutely knackered I really wanted to go to sleep. When I was about to, I realised I’d forgotten to do something really important – my nails. Luckily, Riddick was just starting the telly, so I had something to watch while doing that. You probably think “what’s the big deal, it’s just nails, one layer of nail polish, and you’re done”. But it wasn’t. I had these Phoenix nail decals, and yeah.. In my case, doing my nails meant base coat, colour, colour, colour, decals, top coat, top coat, top coat (7 layers, excluding the decals). They had to survive three days, so I couldn’t just go easy on it. By the time I was done, so was the movie, but I could finally go to sleep, knowing I was fully ready for the next day.

TBC with stuff that will actually be about tanks! ;D